Home Information The coldest day in Sydney in 37 years has been recorded.
Information

The coldest day in Sydney in 37 years has been recorded.

Sydney has officially experienced its coldest day in 37 years.

Today’s maximum temperature in Sydney was only 10.3 degrees, making it the coldest day on record since 1984.

Blizzards dumped more than a metre of snow over parts of NSW in the last 48 hours, as towns and cities shivered in record-breaking temperatures.

On Tuesday, June 8, 2021, snow falls over Perisher, with a cold front expected to bring heavy snow over the next few days. Alex Ellinghausen is a FedPol photojournalist (Sydney Morning Herald)

Snow is also falling in the upper Blue Mountains this morning, with Katoomba, Blackheath, and Mount Victoria receiving their first snowfall of the season.

In most areas of the region, the risk of frost is high to severe, with drivers warned of black ice and hazardous driving conditions.

According to Weatherzone, snow will continue to fall above an elevation of about 900 metres in southern NSW this afternoon, with another 10 centimetres likely in the Alps.

Lower elevations, including the lower Blue Mountains and Greater Sydney, are expected to receive showers today, with temperatures in the city unlikely to rise above 11 degrees Celsius.

Drivers across New South Wales have been advised to postpone their travel plans as the severe weather creates hazardous driving conditions in the run-up to the long weekend. 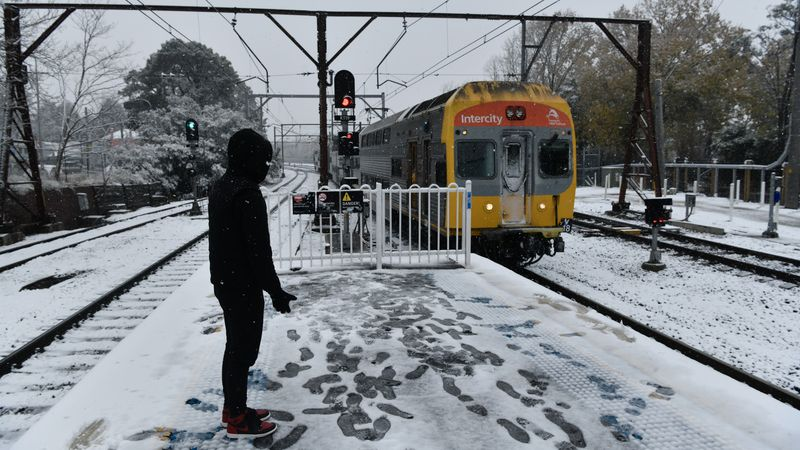 Snow continues to fall in the Blue Mountains around Katoomba train station and surrounds on June 10. (Dean Sewell)

Due to snow and ice, several roads in the state’s Central West have been closed.

The Escort Way between Northern Distributor Road in Orange and Peabody Road in Boree is closed.

Chifley Road is closed between Bells Line and Hartley Valley Road in Lithgow and Ilford. Sofala Road in Ilford is closed about 5 kilometres west of the Castlereagh Highway.

Regional cities in NSW’s central west are waking up to more snow today as the extreme weather continues.

A severe weather warning has been issued for all of Victoria, from Sale to Ballarat.

South to south-easterly winds with gusts of up to 90km/h are expected to continue across Melbourne this morning, before decreasing to 25 to 40km/h in the afternoon and 15 to 20km/h in the late evening.

Another low is causing showers and storms in Western Australia, and a severe weather warning is in effect today.

Prior to the passage of the low, strong to gale force northerly winds are blowing along the west coast.

Winds gusting up to 100km/h, abnormally high tides, and dangerous surf for the Lower West and South West.

Wind gusts of up to 90km/h are possible between Mandurah and Lancelin this morning, with Cape Naturaliste recording overnight wind speeds of 96km/h.

A high is keeping the rest of the country mostly dry and settled.

During flood cleanup, Victorians should be cautious of mould, electrical damage, and sewage.

The top ten favourites for the Eurovision...

If you despise taking out the trash,...